For our first adventure through Europe, we chose the unbelievably beautiful destination of Switzerland. The fact that we would stand in luscious green fields with nothing more than a windbreaker on, while staring up and seeing breath-taking, snow-capped mountains in the distance is astonishing to say the least.
The beauty held within Interlaken, Switzerland cannot be expressed through a nice photo or short-typed caption. The incomparable feeling of fresh air in your lungs and a cold beer in your hand as you are sitting at a restaurant atop a mountain has altered many of our outlooks on nature and life.
After making this first trip, we can honestly say Switzerland may be the most beautiful place on Earth.

Barcelona, Spain: “All Because We Flipped a Coin” 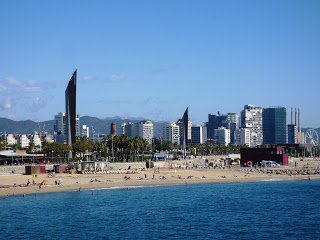 The fact that all of us actually made it to visit this wonderful country is simply baffling! With a French air strike, nearly 1000 miles between countries, and poor weather all working against us, we embarked on our second trip.

The first surprise came just two days before our flights were set to depart. The French traffic controller organization decided to go on strike and forbid all air travel over the country. As many of you may know, pilots typically fly over land as long as they can for safety reasons. This is why, when flying out of airports on the East Coast of the United States, you typically head north along Canada’s coast for as long as possible. We were very uncertain of the status of our trip, since two of our members were flying out Thursday evening while the other three were set to depart Friday afternoon. At this point, it was still unknown when the air strike would end.

Being the determined, young travelers we were, we decided to not let these  challenges stand in our way. After a few phone calls and a short trip to the grocery store for “supplies” (a.k.a. cider and beer), we all met up Thursday evening and started planning. We looked into nearly every option we could think of, short of swimming the English Channel. Every direct flight had been canceled. Flights with layovers in other countries that would avoid flying over France were way over budget for a couple of college kids. With “Timmy the Tourist” fast at work, we had quickly gone through every mode of transportation from air, to car, to bus, to train. Making bets on whether or not Dave he could walk from London to Barcelona was becoming a soon-to-be reality. As the bottles of cider started to dwindle and the cases of beer diminished, we realized we had only one option; a 21-hour train ride that had two transfers in both Paris and Perpignon, France. Since we were not considered “European Travelers,” we had to make all the bookings in person when the ticket booths opened the following day. As we finished off the rest of our drinks, we all went to bed quite uncertain of whether we’d all be sitting on a beach in Spain or in a train station somewhere in Western Europe.

Friday came quickly. Thursday’s flights had been canceled while Friday’s were set to fly. This meant, in order for all of us to make it to Barcelona, two of our friends needed to take the 21-hour bus ride, as the other three would fly out that afternoon. The other wrench that played a deciding factor was that, since we booked through two separate airlines, not taking the bus trip meant that the two individuals would forfeit their nonrefundable return-flight tickets.

The three of us boarded our flight and, after some rough turbulence, landed in Spain. On the other hand, Katie and Dave had shown up at the ticket booth Friday morning and found that the train tickets had been sold out for that particular price category. The only spots left would be nearly 400 British Pounds per person. The only option left was checking into buses, but the only ones available would take over 2 days to arrive, rendering them useless for the weekend trip. With their hopes of sandy beaches and sangria in the gutter, they left the bus station. After a short discussion, they decided to put the whole trip up to chance and simply flip a coin. “Heads we go, tails we stay.” While the other three were already up in the air, so was the coin. As it landed, both stared in sheer amazement as it spun for what seemed like forever. Heads it was! Now, off to the train station! Luckily as they arrived, they found out that two tickets had become available for the same trip at half the price. Both looked at each other and nearly simultaneously smiled and whipped out their debit cards.

The rest of the trip was incredible. Friday night was spent on a pub crawl that didn’t start until 12:20 AM and ended around 5:00 AM. Saturday afternoon was spent on the beach, and the utter amazement of finally getting the group back together around noon that day was unbelievable. We spent the day in the crystal clear waters of a “optional” nude beach, sipping Spanish Sangria and enjoying the company around us.

We laughed in the sun as some people got 5-Euro massages on the beach, while the others just people-watched.

Our evening was an adventure that will have to be recounted in many other posts… But to sum it up; a trip to Razzmatazz, a 10,000-person club, had us lost in minutes as laser lights spun around us and fog smoke filled each room. Two members of our group forgot they had spent all their money on drinks and could not afford the taxi ride back to the hostel. These two spent the early morning hours navigating their way through the, lets just say, “less than welcoming” streets of downtown Barcelona. The next morning was the festival “La Mercè” and we were immersed in Spanish culture as hundreds of “castellers” formed human pyramids towering 60 feet high.

As the final day of the trip came to an end, we spent some time thinking how lucky we were that we had all made it to Spain and survived so many fiascos!

Our trip to Greece could not have been more perfect. We spent our days on the water in an 18th-century sailing ship and swimming in the crystal-clear waters of Amoudi Bay. We dined on the most delicious Greek food and flavorful wines.

On our first day, we went on the Bella and Thalassa tour that took us around the Aegean Sea, onto the Volcano of Santorini, into the lukewarm hot springs, and into the bay to watch the remarkable sunset. We tried Ouzo on the rocks while we ate traditional Greek appetizers.

After our truly unforgettable day, we arrived back into the port and rode donkeys up the 400-foot cliffs that encompass this island’s scenery. We made our way to Alexander’s Boutique, where we were spending the night and had a late dinner at a local, family-owned restaurant. We finished off the night drinking all types of local wines and liquors and relaxing in the cool, refreshing air. The island was truly our own private paradise.

Well, now that we have a few articles and photographs posted, we figured we should tell you a little bit about us here at Talk to Travelers.

We are all college students and world travelers who were blessed with the opportunity to spend a semester abroad in the Fall of 2010. We visited over thirteen countries and met hundreds of individuals from various cultures. We made it from the beaches of Barcelona, to the frigid waters of Switzerland, to the pubs of Prague. Those few short months sparked an undying passion for travel and a thirst for adventure within us. New languages, foreign concepts, unique cultures, and once-in-a-lifetime opportunities fueled us on our travels and have created unforgettable memories. We boarded each plane and train with one thought in mind: “We’ll sleep when we’re dead.”

Summary of Our Trip [In Map Form]

Now that we’ve mentioned a few of our trips, we figured it’s time to give you a better understanding of our trips. Here is a travel log of all of our weekend adventures, courtesy of www.tripline.net. As you can see, for many of our trips we had to return “home” to Edgware Road, London, where many of us lived. Also, check out some of the photos we posted for each “leg” of our trip. We hope this gives you all a better idea of how much we actually accomplished during our short time in Europe.

Total Distance: 14,165 miles (not including the flights between USA and England)
Time: Just over 3 1/2 months
Memories: A million (corny, I know)